Off the Shelf: Jonah Hex: No Way Back 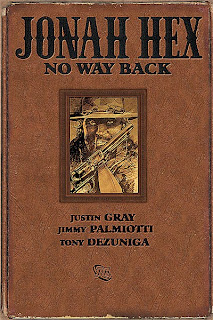 Jonah Hex: No Way Back (DC Comics, $19.99, 136 pages) is better than it needs to be, which I mean anyone who buys this book because they like the upcoming movie version will no doubt feel they got their money’s worth.

As a graphic novel, it’s a solid Western tale that is not without some pretty obvious rough edges.

The gist of the story by Jimmy Palmiotti and Justin Gray is that Jonah Hex discovers from his dying mother that he has a half-brother. With her death, Hex heads to meet the brother he never knew he had and lay their mother to rest. This is far and away the best part of the story, as it highlights the tragedies of Hex’s life and provides a convincing contrast to his violent nature.

Less convincing is the nominal villain of the story, a bandit named El Papagayo who wants revenge on Hex’s family. While El Papagayo provides an excuse for some good action sequences in the book, this element feels very tacked on — as if it was added solely because the book needed an action element.

Tony Dezuniga, who was known for his work on the original 1970s Jonah Hex series, does an outstanding job on the art for this series. His storytelling and compositions are relaxed, confident and clear, while the scratchy finish — assisted by John Stanisci — is a perfect fit for the genre.

Dezuniga also deserves credit for bringing some taste and class to the art. The script calls for a number of rather gruesome scenes that Dezuniga draws with just the right mix of restraint and clarity so that it’s always clear what’s happening without being gratuitous or ostentatious.

Which brings me to the one part of this book that really annoyed me, which is the use of eye dialect in writing Hex’s dialog in particular. (Eye dialog is the practice of writing a character’s dialog phonetically to convey a heavy accent. Chris Claremont used this a lot in his Uncanny X-Men run on characters like Rogue, whose lines were written like “Ah shore do, shugah!” rather than “I sure do, sugar!”) I think this is a technique where a little goes a long way — a few lines early on to establish the accent can let readers assume it continues through the book and let the writer put the emphasis more back on what’s said than how it’s said.

And in Jonah Hex: No Way Back, I found it very distracting. Other characters had distinctive speaking patterns or used terms common to dialog in the genre without going to the extent of Hex near the end saying, “Guilt ain’t sumpthin’ Ah live with. Ah figger guilt is a disease that eats yer soul.”

Maybe it’s just me, and it won’t bother anyone else. Which is fine because despite its rough edges the positives of this book clearly outshine the negatives.

Off the Shelf: Wednesday Comics

This site uses Akismet to reduce spam. Learn how your comment data is processed.